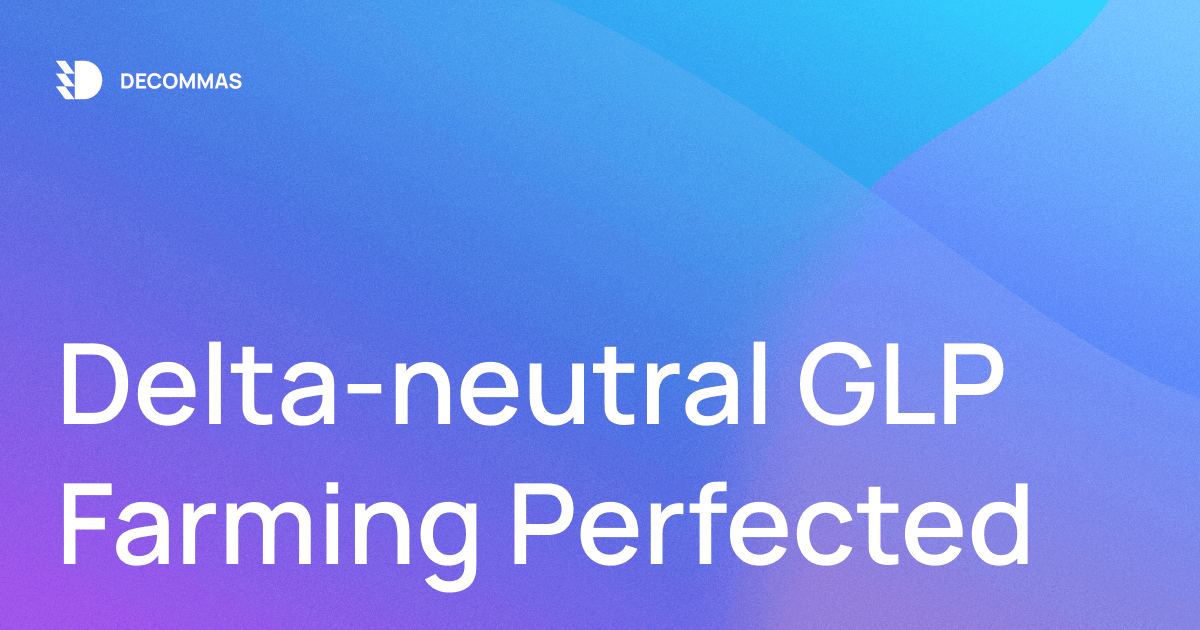 The team at DeCommas is proud to present our research and development progress on the GLP delta-neutral strategy! The vault we launch will showcase our on-chain automation layer with a strategy that is already in massive demand. In this article we’ll discuss what the strategy is, how it works, what aspects we paid special attention to, and lastly go over some performance data and charts.

The DeCommas team has been researching various delta-neutral strategies since late 2021, aiming to find strategies that would last for the foreseeable future, as well as generate attractive yield for users. This strategy is the latest and most promising one our internal research team has found, and that data analysts determine has strong potential to deliver promising results for depositors.

At the time of writing, GLP staking has a total of over $350 million across both Arbitrum and Avalanche. While staking GLP pays out an assumed 25% average APR, getting this yield involves being exposed to price risk from volatile assets like Bitcoin, Ether, or Avalanche. Many defi users want to avoid this price risk and tap into the APR through stablecoins only. Though many have made progress, DeCommas has finally perfected the strategy to deliver as much of this yield as possible to vault depositors with as little price risk as possible.

GLP is a token for liquidity providers on GMX.io, a popular perpetuals trading platform on Avalanche and Arbitrum that allows traders to long or short crypto assets with leverage. GLP is made up of a mix of blue chip crypto assets, BTC and ETH and a basket of stablecoins. Liquidity providers to GLP earn a sustainable yield from the various fee generating activities on the platform including swap, trade, borrow and liquidation fees. The value of GLP floats freely based on the value of this basket of assets and when traders on GMX earn a profit or loss, that amount is additionally deducted or paid into GLP as the pool is the counterparty to those trades. The yield and value accrual from GMX is sustainable due to its generation from real fees and losses from traders, and is likely to remain high or even grow as the platform matures and gains more users.

GLP is composed of a basket of assets, including stablecoins and volatile cryptoassets. The strategy seeks to capitalize on the earnings paid by GMX to GLP stakers, assumed to be around 20% APR, without the price risk of the cryptoassets in GLP. This is done through hedging on Aave. Aave allows the vault to borrow cryptoassets equal to the amount owned by the vault in GLP, and sell them for stablecoins. This offsets the vault’s long GLP position and makes the strategy delta-neutral, meaning that the market price of the cryptoassets does not affect the vault’s total balance in dollars. 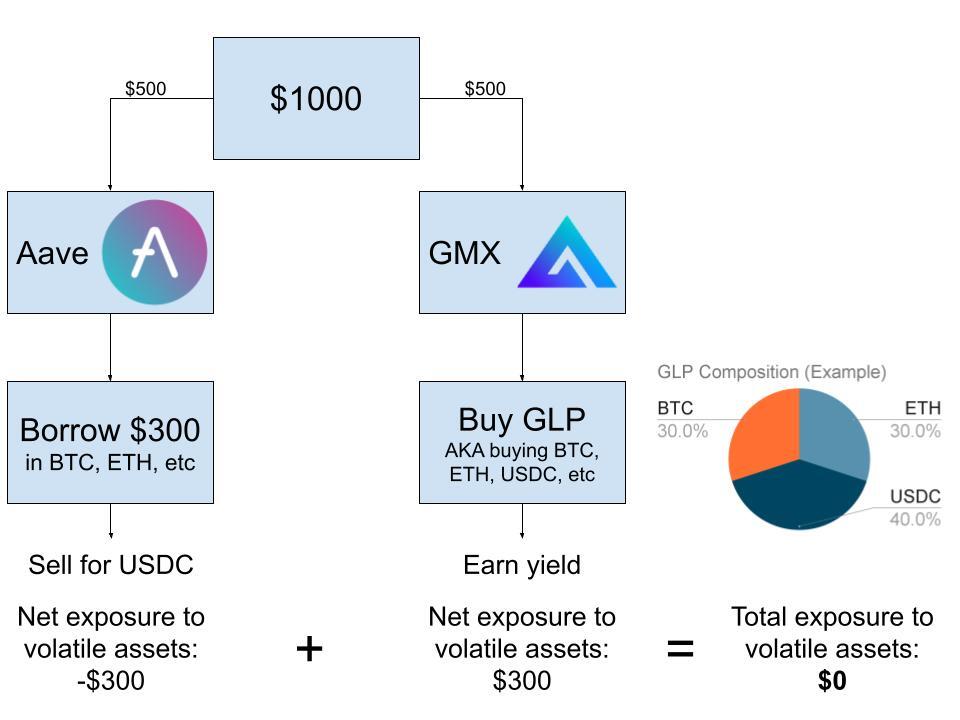 How We Ensured Success

The delicate balancing act of the delta-neutral GLP strategy has been attempted in the past, and many valuable lessons have been learned. These attempts provide great data to set the direction for further development of this strategy. The team at DeCommas has done substantial research on the strategy’s implementation and how to best learn from the lessons of attempts prior. We have used those lessons from our fellow builders to harden the strategy on display here, and create intelligent backtesting for it. We tested many variations of the strategy, and found one that generated high yield consistently and maintained as little market exposure as possible.

The core problem with the strategy that needs solving is: hedging on-chain is expensive. While previous iterations of the strategy set out to hedge downside with derivatives, those derivatives create additional complexity in the system and result in irregular math with difficult-to-locate errors. This complexity can ultimately lead to a heavy compromise on yield.

Avoiding derivatives, we use a simpler and more effective hedging strategy, shorting through spot markets (Aave) instead of through derivatives. This led to much more compelling backtests with consistent results.

This vault instead uses intelligently designed algorithms to only rebalance when absolutely necessary. This lets the vault save on swap fees in the short and long run, ensuring that there is ample APR and minimized price risk.

GLP relies less on external market conditions, which gives us confidence it can deliver yield regardless of market conditions: bull, bear or sideways. All in all, we had countless hours of research into the GLP strategy, our own strategies’ shortcomings, as well as delta-neutral strategies in general to ensure that this strategy is properly vetted and profitable.

Time for the real juice, the performance of this strategy in backtesting. It’s important that these tests encompass all varieties of market types. This includes the bear market that has run throughout 2022, and the extreme volatility in June. Additionally, bull markets must be included as well to account for rising prices, as well as sideways markets where prices do not move much. With the wide range of market conditions in mind, backtests ran from 2022-03-01 to 2022-08-27 to encompass various scenarios.

Ultimately, these algorithms were proven successful, allowing us to boast a stellar 10-15% APR, or 10.5-16.2% APY. In practice however, once we account for the allocations between the hedge and the yield-earning GLP, the realistic yield is closer to 8-12% APR. The APR is also slightly influenced by the minute amount of price exposure.

The APR paid out by GMX to GLP stakers was estimated to be 20% and these backtests were able to deliver about 50-75% of it. This means hedging and price exposure cost the vault about 1-3% annualized, which has proven minimal in cost but highly effective in reducing price exposure. While the entire exposure to price could not be removed, it has been muted so significantly that large declines such as the ones in June do not move the vault balance by more than a couple percentage points at most.

Importantly, the vault has shown its ability to generate income over a long period of time, fueled by the sustainable revenue produced by GMX’s trading platform. While the yield is not solely up only, over any sustained period of time, users are extremely likely to come out with more than they put in.

With the performance overview outlined above, we can dive into the exciting parts, charts and data!

Given the expenses of rebalancing, naturally the first iteration of the strategy we tested was without rebalancing at all, which surprisingly performed well. We tried a few iterations of this, including hedging by GLP’s target weights, GLP’s average historical weights, and GLP’s current rates at the start of the test. All of these returned moderate to good yields, around 6-8%. The below graph shows hedging by GLP’s target weights and never rebalancing. The yield was 8.06% APY. 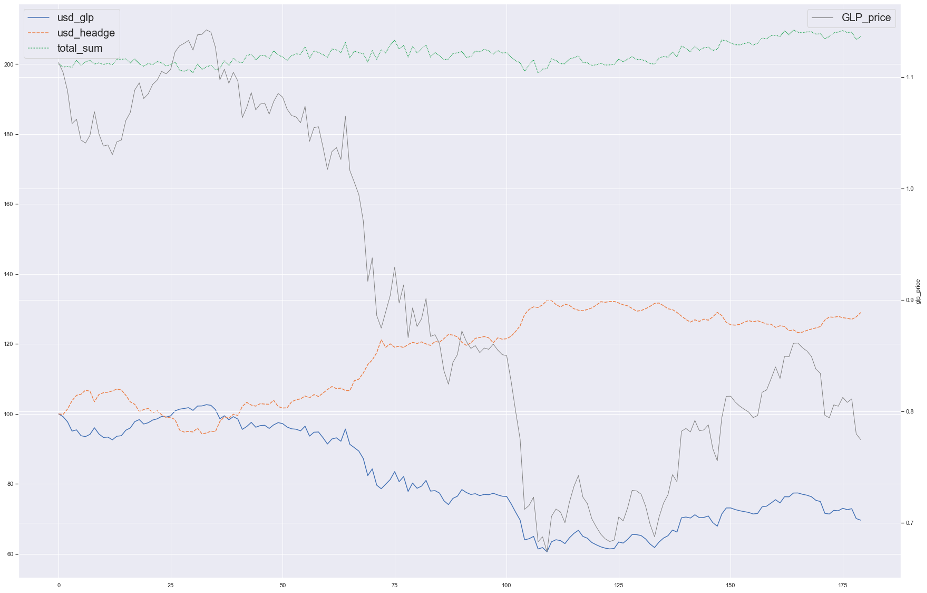 Note that the blue and orange lines, representing the GLP value and the hedge position, are nearly perfect mirror images of each other. This shows that the hedge stays relatively effective even without rebalancing. This test serves as a baseline, and any strategy with rebalancing should perform better than 8.06% APY. One interesting thing to note is the disbalance graph. Disbalance in this context refers to the difference between the USD value of the hedge and the USD value of the volatile assets in GLP. The disbalance graph is below: 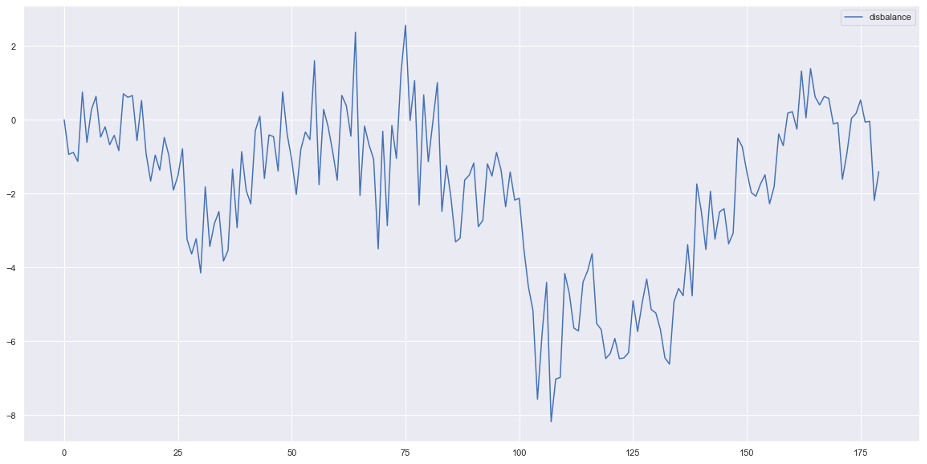 Most notably, the disbalance was mean-reverting. Large parts of this test from March to August were in a down trend, but once the trend flattened out and reversed in Ethereum’s case, the disbalance reverted back towards zero. This again shows the effectiveness of non-rebalancing strategies, because the disbalance will rarely stray too far from zero. This makes the hedge effective over long periods of time with minimal interference. 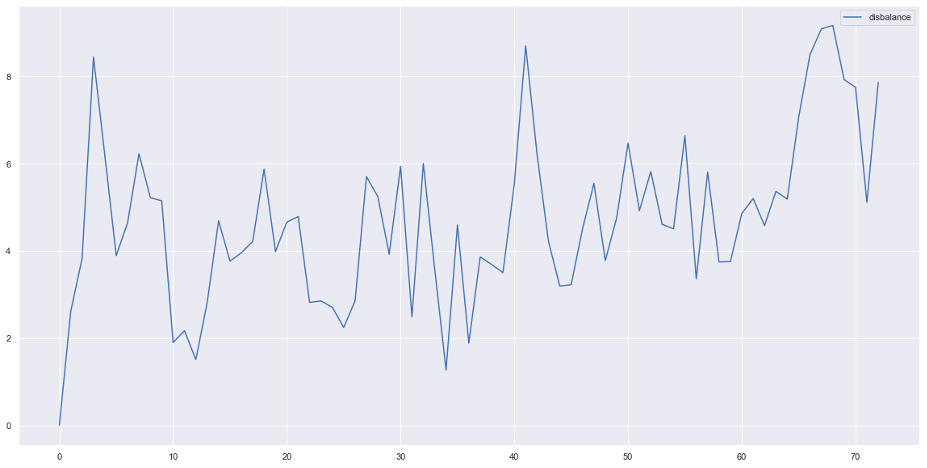 While it likely would have reverted lower at some point, it went far above the acceptable amount of disbalance and gave us net long exposure, skewing the results of the backtest’s yield potential significantly. This strategy yielded over 30% between 2022-06-16 to 2022-08-27 due to Ethereum’s strong rally. While the long exposure led to impressive results for this backtest, it was mostly due to price exposure, which we wanted to mitigate to begin with.

Moving onto rebalancing strategies, it’s important to note that rebalancing over a fixed time interval was never an optimal technique in any market condition. Rebalancing is quite costly, so committing to a rebalance when it isn’t necessary incurs a lot of fees. There was no variation of fixed-period rebalancing that led to earnings above not rebalancing at all.

The rebalancing algorithm we had the most success with rebalanced hedged assets when the disbalance crossed a certain threshold. Once this threshold was reached, the algorithm would rebalance the hedge to match the current weights of GLP again. Using these triggers, we were able to limit rebalances to only 17 over the 179 day period between 2022-03-01 and 2022-08-27. The rebalances are marked by the vertical lines. 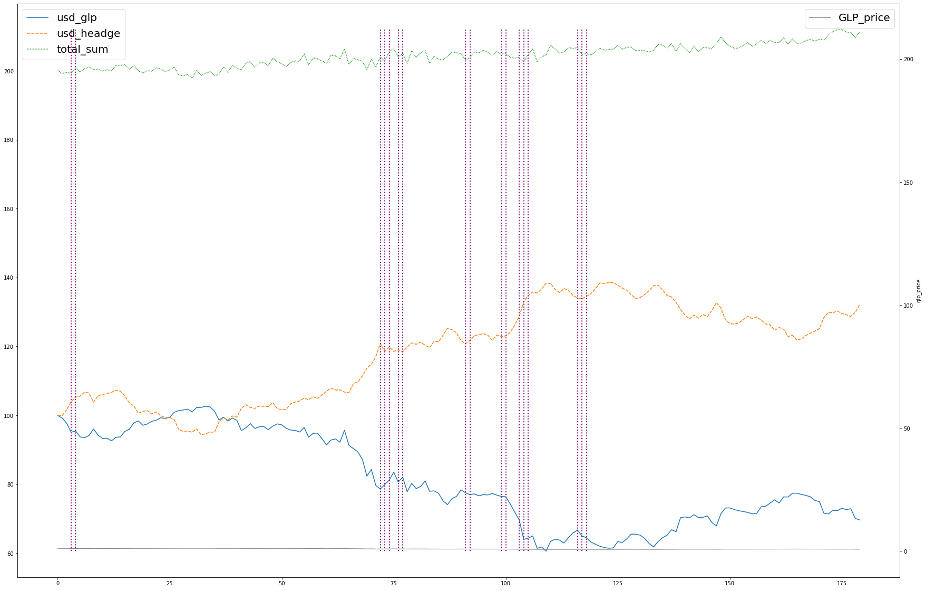 Overall, the research of this implementation of the strategy shows very promising results. We believe that this is close to the optimal balance between price risk and yield. The hedging strategy cost, on average, less than 3% for the period tested, making it likely to be the cheapest option to keep open for the long run on top of simply being very effective. Because of the research and its promising backtesting results, further development is justified, and eventual mainnet release is planned.

The DeCommas team is excited to be pioneering intelligent automation strategies built on GMX. This vault will be the third strategy showcasing the DeCommas automation layer, with the goal of providing builders with access to fully on-chain automation infrastructure. The strategy is complex, and those who master its automation will quickly be rewarded with millions in TVL.

We believe we have done just that.

While it’s too early to share an exact launch date for the vault just yet, the DeCommas Community will be the first to learn about any developments on launch planning. The strategy has to be put through testing in a private environment first with limited funds. This is to forward test and ensure that the vault does not lose money in live market conditions, as opposed to solely relying on backtesting. Once these tests confirm that the vault is able to grow in balance successfully, the vault will be released on production with substantial deposit capacity.

The DeCommas Team is looking forward to forging the path of intelligently automated strategies. DeCommas will continue to automate the impossible, and prove to builders that our technology is at the forefront of autonomous defi strategizing.

This is only the research provided by the Decommas’ team. None of the content presented in this article is financial advice. Past results are not guarantees of any future returns. Crypto investments of any kind carry risk, and you should do your own research prior to investing. 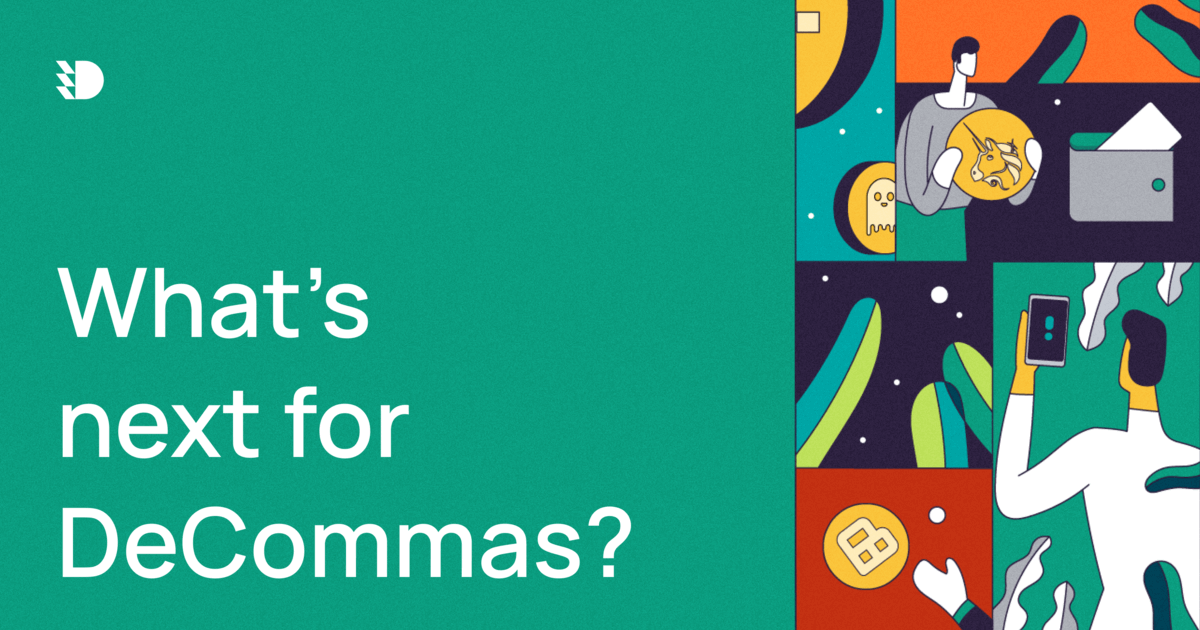 Over the last few months, we’ve been working hard to shape our vision for DeCommas’ next steps. Today, we’re sharing that vision with you, our community. 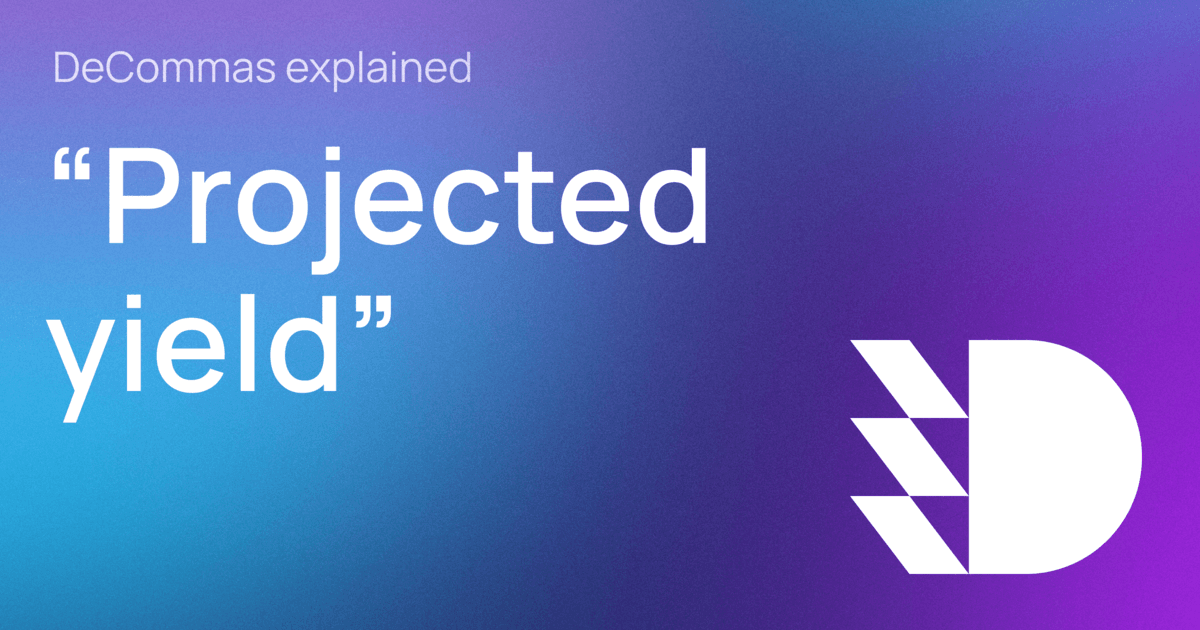 Why we’re showing Projected Yield on our strategies

The often-heard cliche is true, we’re still very early in DeFi, and this also applies to predictable and realistic forecasting of yield within DeFi projects. In this post we’re going to describe the Projected Yield concept, and why we think it’s important to report on, instead of just APY or APR, to give our users the best estimation of what they can expect.